Please be aware that you may find some of the case studies and their accompanying images upsetting, and viewer discretion is advised.

Some breeds of dogs, most notably pugs and Shih Tzus, suffer from a condition whereby the cornea, which is the surface of the eye begins to darken and develop patches of pigment where it should be crystal clear. The pigment can become so opaque that vision begins to suffer, and if left untreated, the pet can go blind. This can happen for several reasons, including irritation from nearby skin and dry eyes.

In Arthur’s case, his owners noticed his vision was deteriorating, and patches of black were developing on his corneas. Often in flat-faced breeds, a fold of skin over the nose sits very close to the eyes and causes a low-grade abrasion of the corneas. This then causes the corneas to pigment and become blackened.

Arthur had this fold of skin reduced, ensuring it did not sit as close to his eyes. He then underwent several cycles of cryotherapy, whereby the surface of the eye is rapidly thawed and defrosted using a fine spray of freezing liquid. With lots of eye drops and lubricants to increase tear production, Arthur’s corneas repaired to a beautiful clear window, and his vision is now back to normal. 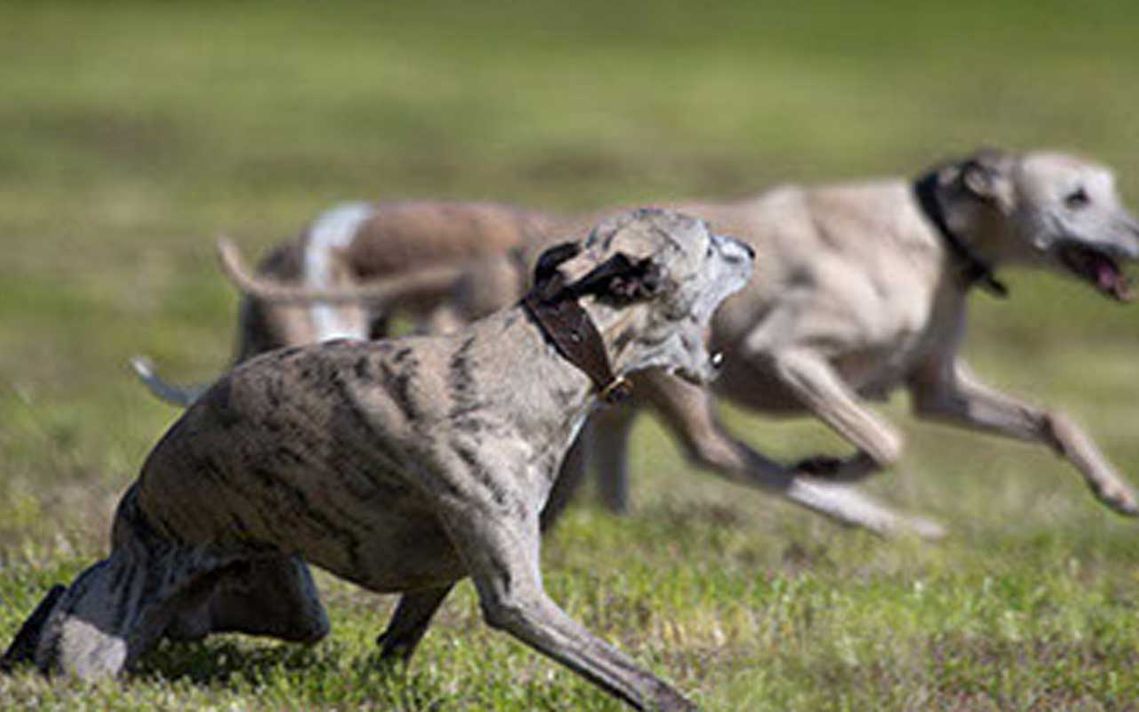 This scary condition struck Ethan, a 7-year-old whippet when owners Barbara and Jeff Poole were out photographing their dogs running. Ethan was brought to us within an hour of the incident, and it wasn’t until later that his owners discovered Jeff had captured the distressing images of it happening. Fortunately, Ethan has made a fantastic recovery as the final images show.

An FCE is a sudden blockage of a blood vessel supplying the spinal cord, causing a spinal cord injury.

Quite often dogs are active at the event, but FCE can occur whilst inactive as well. Most dogs will cry out at the time of the event but seem non-painful after the initial insult. This can result in loss of function of one limb, both hindlimbs, one side of the body, or all 4 limbs dependent on where along the spinal cord the insult has occurred.

Treatment for this non-surgical condition is supportive care and physiotherapy. Recovery can vary greatly with some dogs back on their feet within 24 hours, whereas some can take weeks to months to regain full function. Please see the recovery of Ethan below

What Causes an FCE?

The embolism material causing the blockage is thought to arise from intervertebral disc material, which lies in between the vertebrae in the spinal column.

Diagnosis is often made on history and clinical signs which are non-progressive. However, as signs can be similar for intervertebral disc disease, which may require surgical correction, imaging in the form of CT or MRI is often required to confirm the diagnosis.

Evie was found along with other abandoned kittens, dumped in a back yard, in Stoke-on-Trent. The kittens were taken in and cared for by Iris’s Cats in Need, and many underwent treatment for cat flu and eye conditions. As Evie and her siblings got older, it was evident that Evie didn’t seem to be growing and developing quite as well as the others. A blood test diagnosed that she had a Portosystemic Shunt. This is when an abnormal vessel bypasses the liver, allowing blood, which should have been sent to the liver for detoxification and processing, to instead be pumped around the body, causing a build-up of toxins and eventually seizures and death. Evie underwent a CT scan, which enabled us to identify exactly where this vessel was.

Evie had to have a few months of medical management to get her in the best condition for surgery. This involved eating only prescription food, antibiotic treatment, and laxatives to minimise the toxins in her bloodstream. As soon as her weight was reasonable, we proceeded to surgery.

The shunting vessel was identified with the help of the CT images.

A device, an Ameroid Constrictor, was attached to the Shunt vessel. The inside of this device slowly swells once inside the body and shuts the shunting vessel off. This must happen gradually for the body to have time to get used to the changing blood flows. Sudden dramatic changes in blood flow can be difficult to deal with.

During the weeks following surgery, Evie had some difficult days. Even with the gradual closure of the vessel, the new blood flow caused some pressure problems in the intestines and liver. Thankfully, she improved a little each day, and after two weeks, we were satisfied that she was improving enough to go home to her adoptive guardian.

Evie has gone from strength to strength and is now a beautiful, normal-sized cat, with no sign that she ever suffered from a portosystemic shunt. 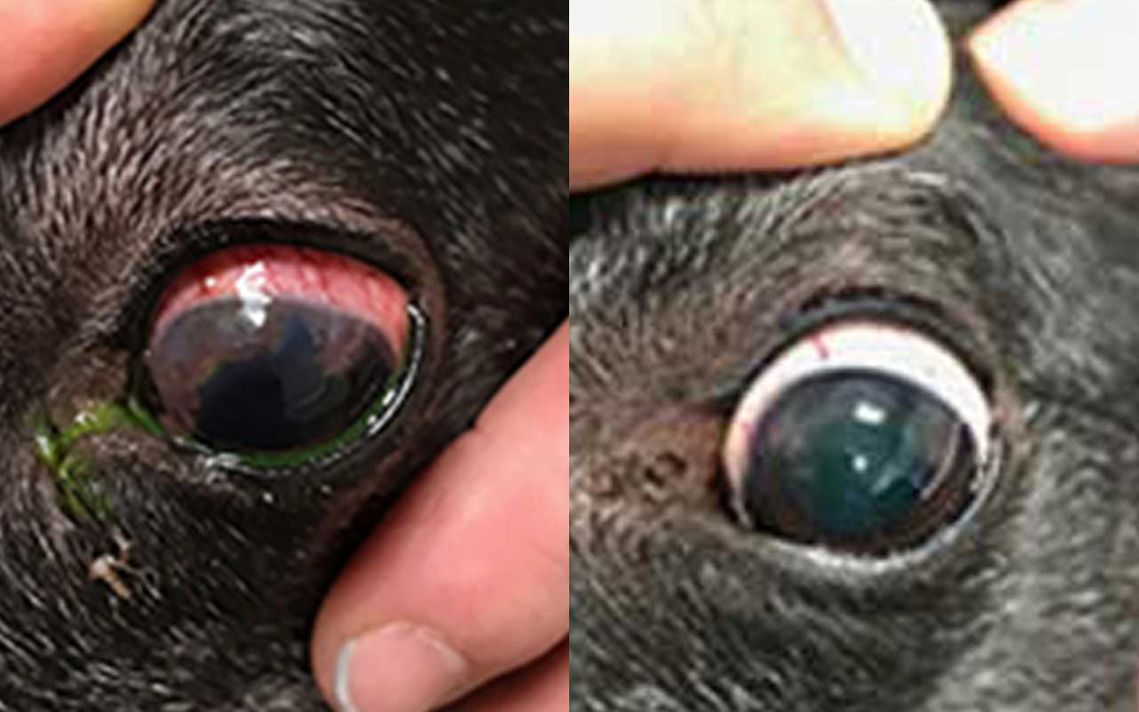 This horrible eye condition can be very painful and affects the tissues that cover the eye and third eyelid. In Leia's case, you can see the patch of abnormal tissue infiltrating the clear part of the eye, from the white of the eye. It has a characteristic geographic pattern. The most important thing is to rule out more serious problems by measuring tear production, intraocular pressure with a Tono-Pen, examining the interior of the eyeball with a specially designed ultrasound probe and inspecting the outer structures of the eye with a slit lamp. Fortunately, if diagnosed early, the condition responds amazingly well to steroid eye drops.

Just one week later, the difference in Leia’s eye is amazing! The condition can reoccur and seems to be more prevalent in certain breeds, such as collie types and greyhounds. It is thought to be caused by the body's immune system (autoimmune). We always prefer to see eye conditions early, as they can get worse quickly, so please don't hesitate to bring in your pet if you are at all concerned about their eyes.

Oscar was 15 years old when he was admitted to Willow Veterinary Clinic Ltd with breathing difficulties. On admission, Oscar was given oxygen therapy in a quiet room to stabilise his breathing. Birds have a unique respiratory system, with a total of nine air sacs throughout the body, which are used along with the lungs for breathing. Veterinary surgeon, Clive, established that the cause of the breathing difficulties was in Oscar’s throat region. To stabilise his breathing, a procedure to place an ‘air sac tube’ was carried out.

Clive made a small incision, over a ‘caudal air sac’, which is located around the abdominal region of a bird. He placed a small tube into the air sac and sutured it in place. Oscar’s breathing quickly stabilised after the tube placement, and further investigations could then be carried out. Oscar had X-rays, and a sample taken from his throat for cytological examination. Clive analysed the results, and Oscar was found to be suffering from ‘chronic occlusive tracheitis’. This is the inflammation of the trachea and is caused by a bacterial and fungal infection. Oscar remained hospitalised for a few days, with his air sac tube in place, and began antibiotic treatment. He was eating well and was comfortable with the tube. He was allowed home, and the tube was removed two weeks later.

Thankfully, Oscar is doing extremely well and can breathe normally following the removal of the tube and medication.

Patsi's story began when her owners returned from holiday to find she had lost the use of her back legs. She was brought to us immediately, and it was obvious that Patsi was suffering from a disease within the spinal cord. We had to work quickly, as spinal cases can deteriorate rapidly, and once pain sensation is lost the chances of recovery are less. Patsi underwent an emergency CT scan with contrast to localise the lesion, which clearly showed a disc rupture with the disc material pressing into the spinal cord. Patsi proceeded to undergo a hemilaminectomy surgery during the night, where the disc material which had burst into the spinal column was removed and the pressure relieved from the spinal cord. She recovered well overnight and was comfortable and eating the next morning. Patsi started physiotherapy, and over two weeks was walking normally again.

Patsi is now back to running, and her owner says she can manage to jump onto the sofa again. Everyone who meets Patsi falls for her, and she’s become rather famous since her appearance on BBC Radio Stoke!

Reggie was brought to us with severe skin irritation and intense itching. The skin scrapes he had, demonstrated a heavy infection with Demodex mites. We began a 4-week treatment course, and partway through, Reggie's hair had already started to regrow. Two months after treatment was complete, Reggie had full hair regrowth and was back to his usual self. It is important to have your animal checked and treated as soon as possible if they are presenting symptoms like Reggie.

The below images show the remarkable recovery following serious bite wounds that Sandy endured. A full recovery was made thanks to the care of all those involved in this case at Willow Veterinary Clinic Ltd.

Our team can tell you all you need to know about our private veterinary practice.

Call Us
© 2021. Thomson Directories Ltd. The content of this website is owned by us and our licensors; copying of any content (including images) without our consent is in breach of our T&Cs |All rights Reserved